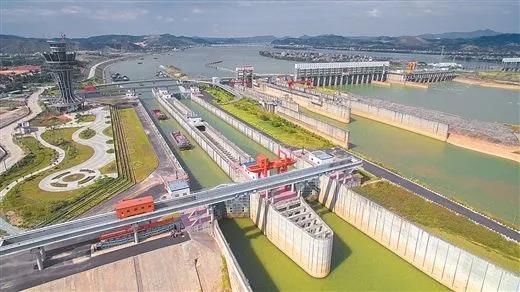 Overlooking the Changzhou Water Conservancy Project from the air, one to four line ship locks stand on the surface of the Xijiang River. The third- and fourth-line ship locks of the Changzhou Water Conservancy Project were completed and opened to navigation. The three-line four-line ship lock was officially constructed in May 2011. The project was constructed as a Class I ship lock. The ship lock has a total length of 4,500 meters, a channel bottom width of 153 meters, and an annual design capacity of 96 million tons (one-way).

WTAU equipped a WTSM-A safety monitoring system for the gantry crane (for Ship lock maintenance and opening and closing work), and the trolley ,which can clearly display the monitoring screen of the monitoring area such as the traveling of the cart and the lifting point in the operator's cab. And store the video screen. It provides a visual guarantee for the reliability of hoisting work and the safety of gantry crane operation.

The WTSM-A safety monitoring system product of hydropower station gate crane provided by Weite Technologies Co., Ltd. is designed and produced in strict accordance with the "GB/T28264-2017 Lifting Machinery Safety Monitoring Management System" standard. The system has been officially put into use and is normal for the ship lock. Lifting operations provide a strong guarantee.